Mr McGregor and I went to a birthday party last weekend in the beautiful countryside in Fife. This area of Scotland, between the River Forth and the River Tay, is known as the Kingdom of Fife as it was one of the major Pictish Kingdoms (known as Fib). The historic and pretty town of St Andrews is on the East coast of Fife and has one of the oldest Universities in the world – the University of St Andrews. It has a lovely long beach – if you’ve seen the film ‘Chariots of Fire’, the opening scene was filmed here. St Andrews is also renowned as the home of golf. It is also very, very busy on a summer afternoon.

Although there was some heavy rain during the day we dodged most of the showers and spent the evening in the garden which looks out over the River Tay. Our hosts had put up two tents for the drinks and it was somewhat difficult to decide which one to choose…. I found myself in both at various times during the evening. 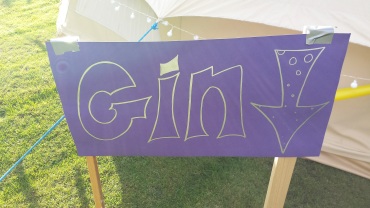 At one point Mr McGregor disappeared for a prolonged period of time and I’d almost started to get worried when he reappeared looking rather pleased with himself. He had found a table absolutely groaning with fantastic desserts and had to spend a wee while deciding which to have – ending up with a bit of everything. 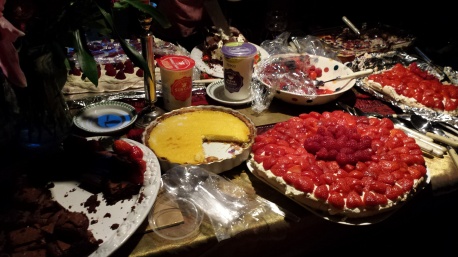 Miraculously, we were not eaten alive by the infamous Highland Midge (Culicoides impunctatus) even though it is predicted to be a bumper year for them (one article suggests there are 68 billion of them around in the summer). Those of you who have visited Scotland will be very familiar with the midge – also known as a Midgie, or in Scots Gaelic as Meanbh-chuileag. This tiny flying insect usually has no hesitation in ruining a summer’s evening outside, particularly if it’s a bit wet – we’ve been tormented by them on a few wild camping trips in the Highlands and the west coast. The females are the ones that bite while the males are less bother, preferring plant nectar. The females initially start stalking you by detecting carbon dioxide and once they have found you release pheromones to attract more of their friends…… They don’t like windy conditions though, so camping in an exposed place or very close to the beach can help. While reading up on this I discovered the Scottish Midge Forecast – what a wonderful thing! However, while it suggests there are very few midges in the south of Scotland I am quite sure I was bitten just now in our garden.

This week’s over-ripe banana problem was solved by baking a banana and chocolate cake. This comes with a warning – it is EXTREMELY moreish so won’t last long.

½ teaspoon of bicarbonate of soda