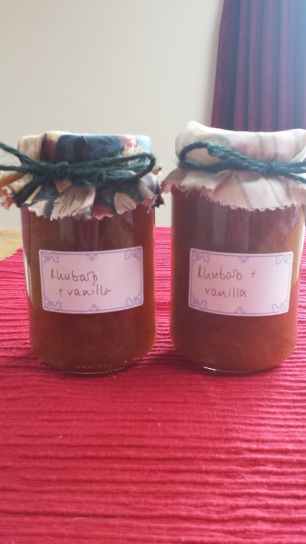 We have just returned from a wonderful week on Orkney. It’s an amazing place to visit – there is so much to see and do. 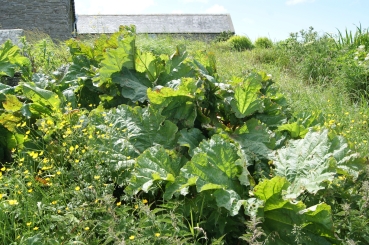 Wherever we go, Mr McGregor likes to check out what people are growing in their gardens.He was particularly impressed with the amount of rhubarb which grows on Orkney. It presumably enjoys the climate since it was growing everywhere, including this patch by the side of a loch.

Luckily, when we returned home our rhubarb patch had taken advantage of the recent rain and had expanded massively. So much so that there was enough to make rhubarb and vanilla jam. 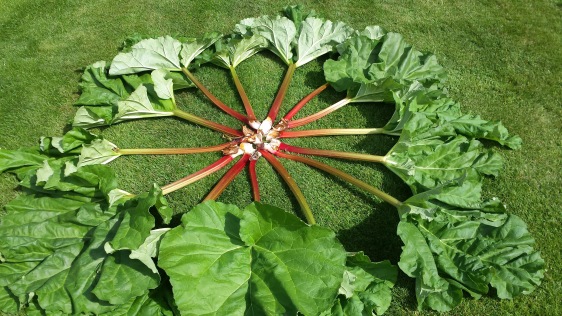 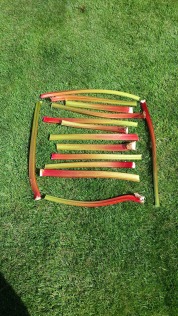 I love making jam with crops from our own garden. There is something very satisfying about making stuff that will last us through the winter. Of course, jam contains a lot of sugar – most recipes suggest a 1:1 ratio of fruit to sugar. I cut this down for my jams and they taste just as good. Cutting down the sugar content may mean it doesn’t set so well, but I can never get jam to set anyway, even with the recommended amount of sugar. It still works perfectly well on toast!

There was enough left over to make rhubarb cake – I’ll share that recipe next week.

**To test for a set – put a saucer in the fridge before you start and put a dollop of jam onto it. Allow to cool for a minute. If it wrinkles when you push it with a finger it has reached setting point. Jam should be removed from heat while you check for a set. If you have a suitable preserving thermometer you could use this instead –  setting point is about 104.5 degrees.

2 thoughts on “Rhubarb and vanilla jam”

Evening fields
First swimming medal for a while! A mile in the North Sea in aid of the @rnli
Today Team @debbie_swimpressivecoaching swam the #maydaymile2021 in a slightly choppy and fairly bracing North Sea. So far we have raised more than £2000 for the @rnli. You can help us raise more for this fantastic cause here https://themaydaymile.rnli.org/fundraising/mandyswim