Today I cashed in a belated birthday present with a good friend – a voucher for a tour round the Edinburgh Gin Distillery. Highly recommended – a potted history of gin, a look at the stills and then a lovely G&T – what’s not to like?

Gin facts: Gin was first made in Holland in the 17th century and was known as Genever, which my lovely friend tells me smells like a pub carpet, although she won’t tell me how she knows this. It was considered to be medicinal and was used for stomach complaints, gout and gallstones. British troops came across gin (or Dutch courage) during the Thirty Years’ War and it was soon being distilled in London. During William of Orange’s reign, gin was given to workers as part of their wages and drunk instead of beer and ale, which were drunk as the water was unsafe. Sadly, although not surprisingly since the gin was 85% alcohol-by-volume (ABV), alcohol abuse became a major problem amongst the poor, as immortalised by William Hogarth in ‘Gin Lane’

(on show at Tate Britain). Parliament acted to make gin expensive and despite rioting, consumption decreased. In the 19th century, ‘Gin Palaces’ became popular (how marvellous!) and gin also became fashionable in high society (apparently as a diet aid…). Although it fell out of fashion during the 1900s, gin is now making a comeback (and hurrah for that).

We then had a delicious (and healthy) lunch at the recently opened Honeycomb & Co – again highly recommended.

While we were putting the world to rights, my friend asked for a cake recipe that her teenagers would enjoy making and eating. Her daughter loves chocolate, so this is for her. The cake is rich and moist, and is even better after a couple of days. Think of it like eating really dark chocolate (e.g. 85%) rather than dairy milk. if that’s too much for you it is lovely served with raspberries and/or cream. Mr McGregor has taken to eating it with blueberries and ice-cream – he calls this ‘Deconstructed Black Forest Gateau’. You can download the pdf here Chocolate loaf 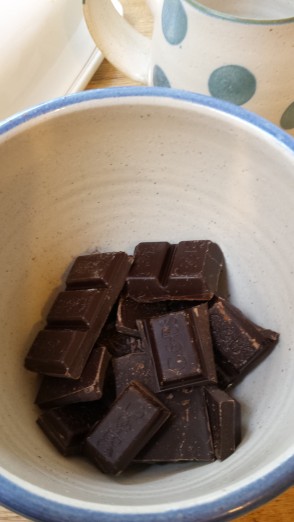 100g dark chocolate, melted in a bowl over hot water and then slightly cooled

One thought on “Chocolate cake – and gin”